This week saw the grade 11’s off on their own adventures with out trips (more to come later this week after they return) and the rest of the house busy in a variety of sports and activities. The big highlight today was the home opener for both the Grade 9 and the Grade 8/9 Rugby Teams.

In the first match of the day, the 8/9 Rogues took on a big and skilled St. George’s from Vancouver. It was a tight game from the start with Georges taking an early lead only to be surpassed by some strong running and deft passing by SMUS. In the end it was George’s that scored a late try to win by one, but the boys in blue played with courage and heart. Especially noticeable were scrum half Emilio and utility back Jero who both made crunching tackles and ran the ball with great skill. They were supported on the wings by Joel and Bobby who were lightning quick. In the forwards, David was very noticeable as he ran the ball with fury and tackled like a maniac. 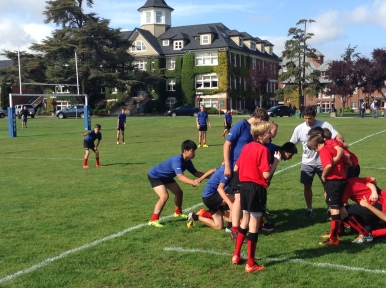 David would see more action in the second game as the grade 9 team played island rival Shawnigan Lake. In a grudge match from the previous week when SMUS was beaten late in the game, our boys showed great composure and courage in a decisive victory. Ranon was a standout who delivered punishing tackles all over the field and ran the ball very well, including a period of play where he only had one shoe on! It was a heartwarming moment for coach Daum to see his Bolton Boys doing so well on the field. It is with great pride that he coaches them.

At the end of the day, all teams shook hands, congratulated each other on a hard fought battle, and headed off to a hearty dinner. The action resumes next week with Mulgrave making the trip over from Vancouver. It is certain to be another day of great rugby.